A few people have now asked me to record an audiobook version of The Long Lost Future, which has been a bit of shock to me because Wolverhamptoneze is not generally considered to be a particularly pleasing accent. There’s no accounting for taste.

I thought about it for a while and decided I needed a piece of software that I could use to do it at home, rather than spending a lot of money on a studio session. I have a good microphone, so I looked online for a free shareware download. There didn’t seem to be anything that did quite what I wanted.

So I wrote one… 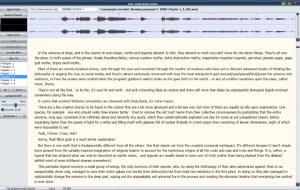 It needs a few more bells and whistles, but I’ll be putting it up here for beta testing when it’s ready. I also have to write the help file first.

I’ll be recording the audiobook of The Long Lost Future with it as soon as I’ve finished writing the sequel, which is still a few months away.